The building blocks of who we are, the tumbling gears that make us do what we do, often seem as difficult to understand as the surrounding universe. Perhaps that’s why the study of personality is a relatively new sub-discipline within the field of psychology.

But either within scientific structure or informally, people have always tried to grasp what makes different individuals behave the ways they do. One of the oldest, most basic, and commonly used approaches to this question is trait theory. 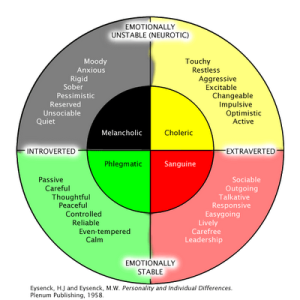 While psychologists currently have settled on some basic truths of the theory, such as introversion versus extroversion, over the years of study and research there have been a number of approaches to trait theory.

Gordon Allport was one of the pioneers of formal personality psychology, and is considered a trait theorist. Allport in 1936 went through a dictionary and picked out more than 4,000 words that describe the human personality. While these would make up the greater toolbox of Allport’s trait theory, he was able to group them into three main categories, and believed that only a few traits really define who we are.

He called these defining traits, Central Traits, a small number of traits that together dominate a person’s behavior. The traits share the makeup of a personality, and can be descriptions like shy, intelligent or honest. Coming in at a less influential level are Secondary Traits. These are aspects of a personality that may be situational, or of limited importance, such as disliking being in closed spaces or crowds.

Finally, Allport theorized that occasionally but notably, one central trait will emerge as a dominant force in a personality. He called this a Cardinal Trait, which becomes a person’s defining personality trait that overshadows all others.

Raymond Cattell Narrows It Down

Allport’s theories remained influential in personality theory, but 4,000 traits were considered by many to be unwieldy and impractical for applications. So in the 1940s, Raymond Cattell boiled Trait Theory down to something more manageable. In Cattell’s early career he was a research assistant to Charles Spearman, who developed a way of approaching statistics called factor analysis, which involved grouping commonly appearing factors in sets of data.

First he went through the list and combined similar traits and eliminated those that seemed unnecessary or very rare. This got him to a list of 171 characteristics, which he then ran through the factor analysis method to determine which of the traits were closely related in a sample group of people. This got him down to just 16 main personality traits that he determined defined our personalities—characteristics like warmth, dominance and apprehension. According to Cattell, we all have these main traits, and our personalities are determined by the degree to which each is present.

The resulting test, the 16PF assessment method, became one of the most commonly used personality rating tools.

Still unsatisfied with the extensive list of possible personality traits, Hans Eysenck would narrow the list of characteristics to three main areas. Originally, he said everyone could be defined by just two rubrics—Introversion-Extroversion and Neuroticism-Emotional Stability. But in his studies, he found that certain subjects displayed behavior that couldn’t be tied to these categories. The result was the convenient third category that encompassed mental illness—Psychoticism.

Over the years of study and research, many would argue that Allport’s approach was too inclusive, and Eysenck’s far too simplified. But psychologists would continue to come upon similar, recurring theories and character traits, such that there are a handful that have become commonly accepted. One clear, widely accepted scale on which to rate people would be Introversion vs. Extroversion. While they vary, of course, between psychologists, many have settled upon five key personality traits.

This theory is often called the Big Five, or as some call it OCEAN, a handy acronym, to outline these traits. The traits are Openness, Conscientiousness, Extraversion, Agreeableness, Neuroticism. Looking back at early versions of trait theory, you’ll notice that these five traits have popped up repeatedly, particularly extroversion and neuroticism. The theory goes that all of the other, more minor traits will fall within these five.

Trait theory has some pretty obvious ups and downs to it. Perhaps the biggest strength of trait theory is that it’s fairly understandable and straightforward. As a result, it’s the kind of thing that can be implemented easily, and has been, for many years with many patients. Unlike much of personality theory, or psychology, it’s a pretty intuitive and something that has settled into a fair amount of consensus among practitioners.

Another big plus is the fact that it’s objective. Trait theory usually relies on hard data, or statistical analysis that much personality theory doesn’t have on its side. A lot of psychoanalysis involves personal interpretation of subjective factors, and as a result, can be influenced by the tendencies of the analyst. The subjective experiences of the theorists involved also do not influence the theories, as many argue is the case with Freudian or Jungian analysis.

On the flip side, the biggest shortcoming of trait theory is that it does not address how or why the traits develop. While it’s objective, it’s also very light on interpretation or analysis. It’s more of an observational system than one that gets to the root cause of a personality. Similarly, the assembly of traits is also notably poor at predicting behavior. Someone can be analyzed using trait theory to come up with key indicators of how they tend to behave, but that behavior, in practice, might be quite different.

For example, a subject might rate heavily toward introversion, the tendency to want to be internal and avoid overly social situations, but next Friday night find herself having a lovely time in a crowded party. People don’t always behave according to their tendencies, depending on the situation.

Trait theory is considered a solid, objective tool for evaluating a personality, and over time its practitioners have developed quite sophisticated methods for getting good measurements of the key traits. The main tool for assessing the strength of a person’s character traits is through self-reporting. Often, self-reporting can be extremely murky, as people are generally not the best interpreters of their own behaviors. But psychologists have developed tests with hundreds of questions that have proven through research to be quite reliable at teasing out accurate personality assessments.

The MMPI test (Minnesota Multiphasic Personality Inventory), for example, has gone through multiple restructurings and fine-tunings since the late 1930s, and has a way of spotting a test-taker’s tendency to give innacurate answers. That means, in addition to rating subjects on scales of behavior, it also rates them on their likelihood of lying, faking or being defensive.

Tests like the MMPI are used by clinicians to assess mental illness, but they are also used in a number of other applications. For example, government security clearance screenings use the tests to weed out potential hires that may pose a threat. Personality tests have been used in anything from criminal trials to custody disputes, and are often used to screen applicants for high pressure or dangerous jobs.

Another common use of personality tests involved college students seeking out their future careers. Guidance counselors often give personality trait assessments to determine tendencies to like or dislike certain professions. And employers will sometimes screen their staffs to get a better sense of what kind of person fits into company culture, or who might be suited for different departments.

Keep in mind, however, that just as trait theory has its limitations in reliability and rigidity, so do applications of personality trait assessments. While such tests can be quite useful in the hands of professionals, they can be controversial when used to boil down living, breathing and evolving humans into a set of simple scores and labels.

Trait theory has come a long way, but the personality is still a complex and dynamic beast, making any attempt to reduce it too much a controversial endeavor.